For all the great things that are talked about Li-ion batteries, I do not have a good feeling about them. I agree they are much lighter than lead acid batteries and can probably handle more current. But I always felt the maintenance and life of these batteries is far worse than traditional batteries. Take the case of phones or laptops. In spite of taking great care, they generally don’t last as long. Most of my phone batteries show lowered performance after 3 years and very poor performance after 5 years. I am sometimes left with swollen batteries. And to think we are using Li-ion batteries in EVs. I wonder how long they will really last when the environment they operate in is much harsher when compared to laptops and phones.

I have seen several batteries that have swollen. If I should count, that would be at least 10 in the last 10 years. But these were in tablets, phones and laptops that were left unused. That is one thing I learned. If you leave batteries in devices that are not used for a long time, it can cause serious problems. What many suggest is that if you are not going to use a device for several days, one should charge it to around 50% and then shutdown and leave it. I usually do that, although I can’t get to precisely 50% because I usually charge the device and forget. So it usually goes up to 80% or so. I have a recurring Google calendar event every 6 months that tells me to top up all my rechargeable batteries. I diligently follow it. Even with that kind of care my batteries keep bulging. 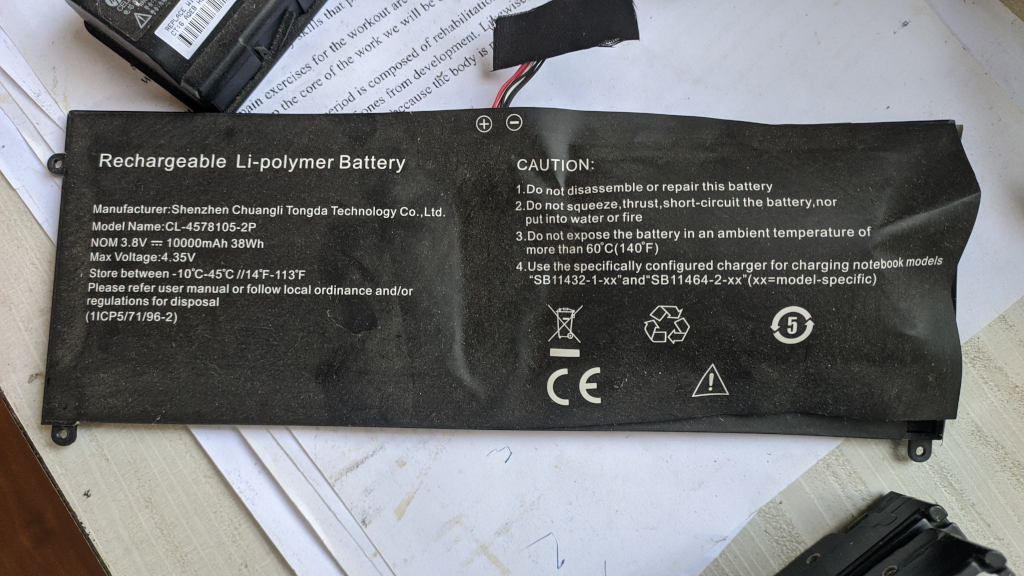 The batteries in devices that I regularly use, such as my laptop or phone seem to have very poor performance after 5 years. Yet, most electric cars these days are offered with 8 year warranty. I wonder how that would work. Most recommend that the laptop or phone battery should be between 20% and 80%. I follow that advice too. I generally charge my phone or laptop as soon as it reaches 20%. When I used to run custom ROM on my phone, there used to be an option to limit the maximum charge to 80%. The battery lasted very well for 3 years, but my phone broke so had to replace it. So couldn’t do a long term study on it.

My current phone does not have a custom ROM and the OS that came with it does not allow me to limit the charge to 80%. It has something called Optimized charging which supposedly charges the battery to 80% and then charges to 100% just before you unplug (based on your charging pattern). Don’t know how well it will work. Lets wait and see.

My old HP envy laptop used to work well without any problems until about 4 years. Well the amount of time the battery would last reduced progressively but it was not too bad. Perhaps the battery lasted for half as much time as it used to. Then it started reporting errors whenever it was turned on from a full shutdown. So had to replace the battery. Now after just 1.5 years, the battery is showing problems again. It is not charging to full 100%. It stops at different battery percent every time. Sometimes it stops charging at 15% at other times it stops at 79%. Pretty random. I am wondering if the charging unit in the laptop is to blame. I checked with another charger with the same result. So either the charging unit is not right or there is a battery problem.

My new laptop which is just over a year old, while charging to 100%, is not charging to full capacity. At least according to what upower is reporting in Linux.

It seems like while the battery’s full capacity is 48 Wh, it is only charging to 43 Wh now. Which is only about 88.9% of its original capacity. Normally batteries are supposed to work for 3 years before they degrade to 80% of full capacity. I am not sure if my laptop battery would last that long. One issue is that I leave the laptop connected to the charger all day long and only unplug when I need to be mobile. Unplugging does not happen that often and I almost use it like a desktop. While my old laptop did not have charge limiting software, thankfully the Acer Aspire 7 has one called as Acer Care Center.

While the software is only available for Windows, I found that some one took the effort to write a linux port of it of it. The only problem is that it has to be compiled from source since it is not integrated into the linux kernel yet. So every time I change my linux kernel (which is not that often if you ask me), I need to recompile the module. This module allows me to limit charging the laptop to 80% of the capacity, which lets hope improves battery health.

The best part about the code is that it sets the limit in hardware. So even if I restart the laptop or shut it down and charge, the 80% limit still works, unlike in the phones where the phone should be running to limit the battery charge. Every month, I let the battery charge to 100% just to make sure it still works. I wrote a small script to do it in case you are interested.

Now, I don’t know what kind of smarts the EVs are using to maintain battery health, but they better be good. As a consumer, you need to understand that as soon as the battery warranty is over, you should be prepared to pay a hefty price to have the battery replaced from what I understand. For example a Tata Nexon EV owner reveals that the cost of replacing the battery is Rs. 7 lakhs which is almost half the price of the car!