You already know about the two kinds of expenses that I track – monthly and annual expenses. You probably also know that I publish my expense report for the past year and mull over it a bit. Then I create a new budget for the expenses for current year. Following the tradition, here is a post about my monthly expenses in 2022 and the budget for 2023.

These are expenses that repeat many times with in an year, like food, petrol or vacation expenses. The budget for last year was Rs. 63,000 per month. Our average, monthly expenses were Rs. 52,000 which is below the budget. This is the 5th year in a row we have managed to stay within the budget since our retirement. However, the inflation was a bit higher than I expected and we will understand why soon. Normally I expect a 6% inflation on average, but this time the inflation was 9.5%. Still it is not as bad as 2021’s inflation which was almost 14%!

While the inflation has been a bit high for the last two years, if you look at inflation since I retired in 2018 it is 6% which is exactly what I was expecting on average. I only hope that we don’t continue the recent trend anymore. Now lets bring out the spending donut and see where we spent the most. 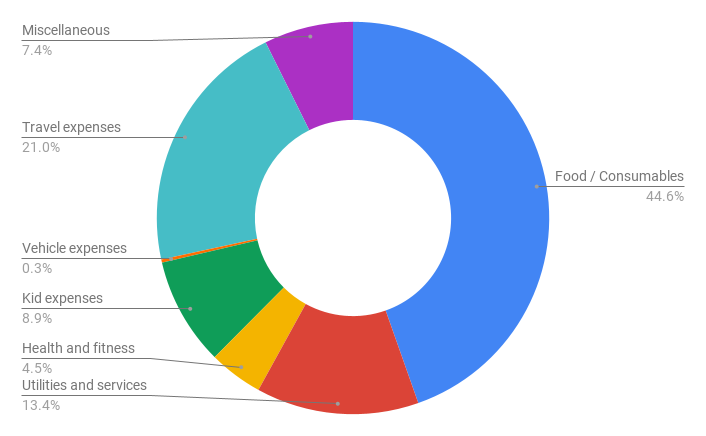 As usual, our biggest chunk of expenses of 45% came from “Food and Consumables” which is perfectly acceptable. What is not acceptable is our next biggest expense “travel” at 21%! I am only half joking that it is unacceptable. But the real reason for my concern is that I never anticipated that travel will be a big chunk of my expenses when I planned my original retirement budget way back in 2018. That is life for you. Things will be different from what we plan :). There were a couple of reunions that happened and I traveled by flights. It was money well spent thought. I met some school friends after more than 25 years and some engineering friends after 20 years!

The next major expense at 13% was in “Utilities and Services”, basically internet, electricity, maid, cell phone bills, LPG, homeowner association fees etc. Finally, my kid’s expenses have slowly started to increase as she is becoming interested in activities (toys, video games, travel, books, swimming etc). Beyond that, all other expenses are quite small, so no point elaborating them. Now lets take a look at month-on-month expenses. 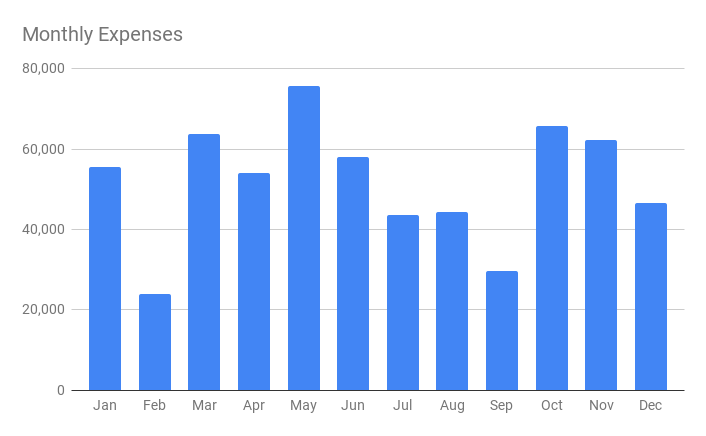 The expenses have been quite uneven over the months, but the best months seem to have been February (which it has usually been since my retirement), followed by September. Most of the high rises have been due to travel related expenses. The lowest spending was Rs. 24K in February and the highest was Rs. 78K in May. Then, coming to our spending in each category, we were mostly within budget except for travel. 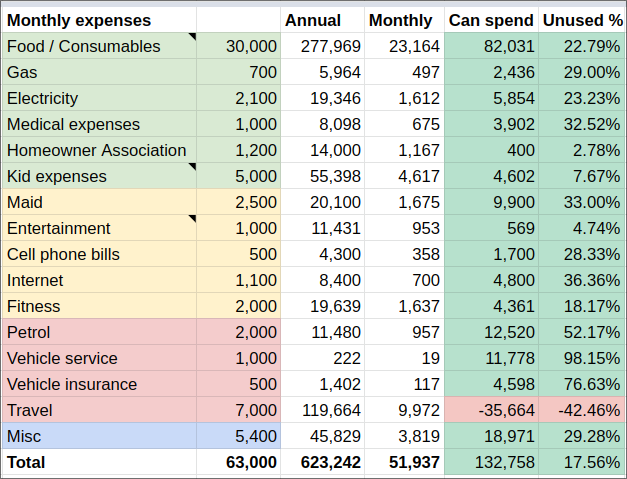 The data in the above image is the most interesting part for me. I like to ponder over it quite a bit. It tells me where I have been overspending above my allocated budget and by how much. The value is not as important as the percentage. From the data, it seems like we exceeded the travel budget by almost 50% which we know why, so nothing alarming there, but it should not become a bad trend going forward. Beyond that, our entertainment expenses and kid expenses have almost exhausted the budget. The kid expenses are fine because we can’t put a value on that. The entertainment expenses include eating out, movies, PC games, mall, or any other fun expense that is not part of travel or kid expenses.

Most of the rest of the expenses are pretty much inline except for two outliers – vehicle service and vehicle insurance. The reason as you already know is because we purchased a new car and hence the insurance is part of buying the car and I did not want to split it out here. We will see a big jump next year when the renewal will be due. What you are seeing is the two wheeler insurance.

Regarding the low vehicle servicing expenses, I sold my car just before it was due for service in September. While the two wheeler servicing should have happened in December we could not get it serviced because we were traveling and it got rolled over to this year. Just to clarify, I get my vehicles serviced only once a year because we drive very little.

Like every year, I increase my budget by approximately 6%. Since it was Rs. 63,000 last year, this year the budget is increased to Rs. 67,000. The reason for using 6% for inflation is because that is what I projected my inflation to be after retirement. But as you know from the table above, some years the inflation is lower and some other years it is higher. On average, hopefully, the inflation will hover around 6% in the long run.

Having seen the spending style of last year, I allocated most of the extra budget amount (Rs. 3,000) to travel. I increased the kid expenses budget by Rs. 1,000 per month. The rest of the budgets remain unchanged. 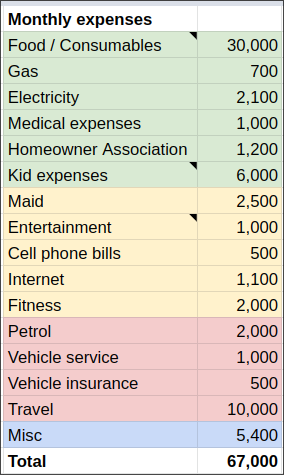 That is all for today. I will be going over my annual expenses in my next post.