It has been more than 6 month since I installed my lone 320W solar panel. So I wanted to check if it was doing me any favors and how much money is it saving. Normally one should wait for a full year to make any kind of useful analysis. But I get easily excited when it comes to doing any kind of data analysis and here I am at it again. It is a very small installation and hence the savings aren’t huge, but at least I am able to verify my predicted numbers (units of electricity) against the real numbers. Did I have any savings or was this whole solar panel project a waste of my time and money. Let’s find out.

If you remember, I installed my solar panel in the middle of February, 2021. At the time, I estimated that I will get maximum bang for buck by using a 320W panel. Remember that you get the maximum benefit when you can cut out the units going into the highest electricity tariff slab. For example when we were consuming an average of 250 units per month in 2020, I was paying at the rate of Rs. 8.05 per unit for the last 50 units. See table below.

So if I could cut down the last 50 units, I could be saving Rs. 402. Further reduction of another 50 units will only save me about Rs. 350. So as you can see, the more units you try to save, the less benefit you will get, for the same cost of installing a panel that knocks of those 50 units.

On average a 1 KW solar panel generates about 4-5 units of electricity a day under good conditions. Of course if it is a cloudy day it will be much lower. So according to my calculations the 320W panel that I purchased should generate about 320 / 1000 * 4 = 1.28 units per day, or about 38 to 48 units a month. Naturally, my question was if it was really generating as much energy. Since I installed the panel in the middle of February I could not get the full reading. The billing cycle over where I live happens on the 10th of each month. So the March 10th bill was not very helpful. When the April bill arrived, I had some answers.

I received a bill for 190 units in April 2021. Compared to April 2020 it is 82 units less. Of course it is possible that my usage pattern in 2021 is not exactly the same as it was in 2020. Still, out of the 82 units saved I am sure at least 50 units were contributed by the solar panel. I looked back in history and these were the number of units consumed in the last 5 years in April.

Not bad right! Even if I assume 50 units were generated by the solar panel, I would have saved at least Rs. 400 from my electricity bill that month. The story continued into May 2021 too. I got a bill for 215 units as compared to 272 units in May 2020. I saved another 50 units or so in that month. I was pretty excited. But remember these were the months when the sun in really bright and there are almost no cloudy days here in Bangalore. We cannot just extrapolate those numbers. Ideally we need a full year worth of data and that I could not get unfortunately :(.

A wrench in the system

Some time towards the end of May, our energy meter conked out. It started showing some error and was not reading the power usage. The person who takes the meter reading informed me that the meter needs to be replaced. So June bill was all wrong. As you can imagine, getting a government worker to have something replaced takes a long time if you don’t want to bribe them. And that is what exactly happened.

I kept calling the good people at the electricity board several times to get the meter replaced. Each time they would have some excuse for not coming, their responses ranged from “we have a staff meeting right now” to “the staff is getting COVID shots today” to “line man is busy” and so on. Just look at the number of times I called one person (screenshot below). I called almost everyday to ask if he was going to come fix the meter. 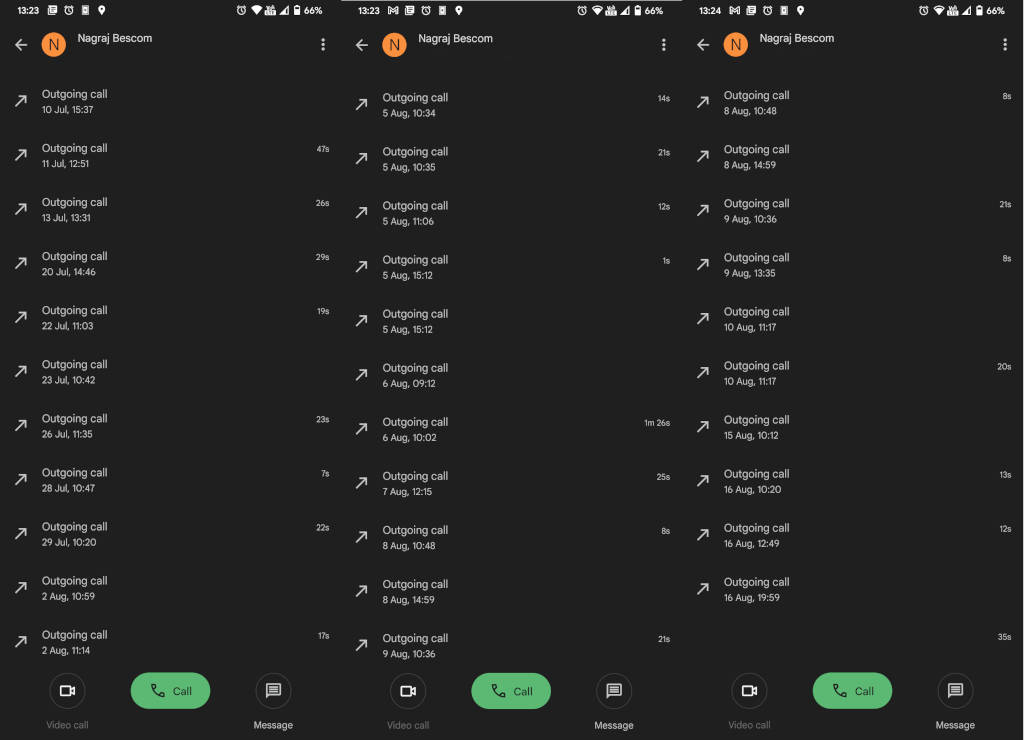 Thankfully all through the calls, they were polite in their responses. I was understanding and spoke politely too. Perhaps they have some legit reason for things to move so slowly. Anyway, they did not ask for any bribe nor did I offer any. Eventually, two months after identifying the faulty meter, they fixed it in August. Not bad for a government service.

Given what happened, I did not have a correct bill in June, and no bills for July and August. I was hoping that September bill give me some answers. Unfortunately it seems that my new meter number was still not registered with the electricity board and no bill was generated. In October the bill showed the units consumed for part of August when the meter was installed and for all of September. So again not the correct units. Finally the November bill came out properly and that is why I am writing this post now.

The main reason I was upset that I could not collect any data for the past few months is because it is the monsoon season and this is the time when solar panels will have the poorest performance. I wanted to know how my panel performed. Most days during the past 3 to 4 months were cloudy. Anyway, the November bill was for 205 units. Compared to 217 units in 2020, and 245 units in 2019, it seems like the solar panel suffered quite a bit.

Have to check again in the December bill, but I think the number of units generated on cloudy days to be around half of what I normally see in the summer times. The thing is that the software I wrote collects a lot of data about how much solar energy has been generated and that data is stored in the cloud. All I have to do is to write another software to download the data, clean and convert it to something useful. The problem is that I am not finding enough time to do that. I have been quite busy the past couple of months due to various reasons including family visits, new toy (laptop), migrating my blog from WordPress to Jekyll and some work I was doing on the side. More on that later.

Sample data as stored on the cloud

So it seems like the solar panel might be generating some 35 units of power on average. But like I mentioned in the beginning of the post, we need a full year’s worth of data to make any real conclusions. I will write another post in November 2022 (if I can remember) with more details and perhaps some clarity. Meanwhile the unit rate of the top slab changed to Rs. 8.15 (from 8.05 earlier). So more savings. If my assumption is correct then I will be saving about Rs. 3423 per year and I should be able to recover my investment in solar panel in about 4.4 years. Let’s see.

Savings Due To Solar Panel

Getting The Most Out Of Solar Panels