This is the continuation and the conclusion post of my previous post. So if you have missed it, head on over there first. As you know, I have decided to upgrade my old TP-Link router with Asus RT-AC58U. Initially I was extremely happy with the performance although it was running a little hot. The performance and coverage was just great. But things turned south as soon as I tried using it as a NAS. While I know that the processor on the router will not be powerful enough as a dedicated NAS, it performed quite poorly in my opinion.

After setting up the router, I connected my trusty 8 TB external hard drive via the USB 3.0. I was excited to do some performance testing. The drive has a single ext4 file system which the router supports. The drive was detected and I setup Samba. Then I tried to transfer some large files from one location on the drive to another over wifi using my laptop. That test did not go well at all. I was listening to some music on my laptop, the source for which is also Samba. And as soon as I started transferring the file, the music would drop and sometimes completely stop. Meanwhile, the transfer halts for long time, then suddenly goes full speed, then come to a crawl. The transfer rates were all over the place. I am wondering if the amount of memory the router has is to blame. The RAM usage was over 90% during the transfer. The router was unable to handle sending and receiving large files simultaneously while keeping my music stream flowing.

I struggled through the issue for a couple of days, searching online for similar issues. Could not fix it. One more issue was that the status lights on this router were quite bright and gave a nice blue disco light effects in the night. My daughter was having trouble falling asleep with the lights, so I covered them with a book, but I was also worried if that will cause the router to not have enough cooling area since it was already running hot when compared to my old router. My old router had much softer green lights which did not light up the room in the night, so never had to handle the issue. 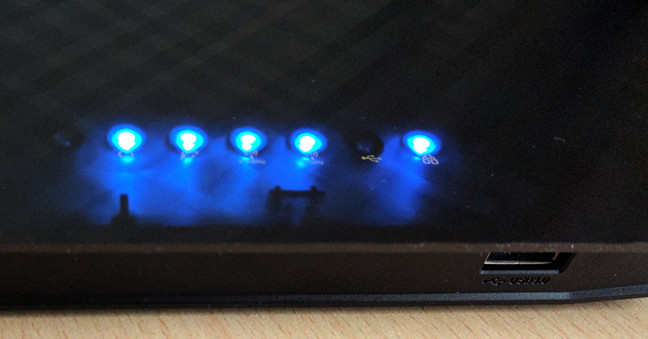 Lights are too bright for the night (source)

I eventually decided to return the router, mainly because of the NAS issue. Otherwise I was thoroughly happy with it. Amazon, as usual, was great with returns. I then ordered Tenda AC10 which was my second choice. The router arrived promptly in two days.

The box came with a router, an ethernet cable, power supply, and documentation. The very first thing you will notice about the router is the alien spaceship like design. I like it. Got down to set it up right away.

The setup for this router was very interesting. The quick start guide suggested that I should connect my old router to the new router via ethernet and it will configure itself with the settings from the old router. I had my doubts, but it worked like a charm. I did not have to enter my PPPoE username or password. It just picked up everything from my old router. All I needed to do was setup network name and password, and change the router password. I don't think it can get any simpler than that. As usual, I ran my battery of tests. Speed and coverage is similar or better than Asus router. The coverage was especially good. It covered the ground floor, first floor and terrace without any blind spots and the speeds were consistent and good in all the places that I use my devices. Here is the coverage in ground floor covering a 2400 sqft area (the router is on the first floor). 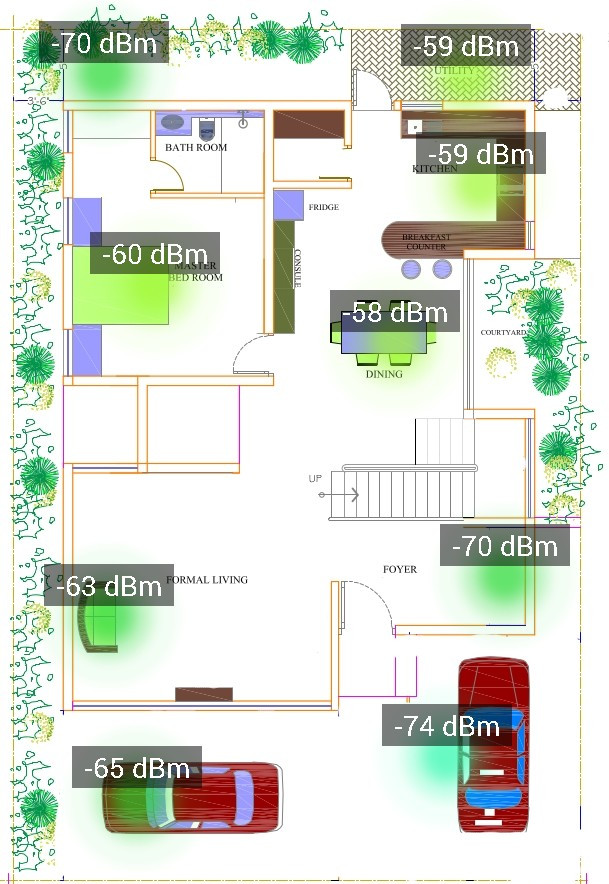 Transfer of large files did not saturate the network or interrupt my music stream. So all good on that front. The only downside compared to Asus router is that it does not have a USB port, which means I still have to run my media center PC 24/7 to provide NAS like services. But it is alright, I did not have that as a criteria to start with, when I was searching for a router. The other very interesting thing I found out was that the router can be setup to reboot itself everyday at a specific time. I found this to be useful because now I don't have to reboot the router with a cron job like I used to do with my old router. Although I am not really sure why routers need to be rebooted in the first place.

But the icing on the cake happens to be the LED control on the router. You can schedule a time to turn off and turn on the LEDs on the router. I found this to be exceptionally useful because now I don't have to worry about the bright status lights when my daughter is trying to sleep. The lights are not too bright to start with anyway. I did not even know such settings exist in modern routers! Routers have come a long way.

The router of course has all the other bell and whistles you typically expect, such as firewall, DMZ, UPnP, DDMS, mobile app control, bandwidth control, VPN, DHCP reservations, parental control, guest network etc. If you are in the market for a gigabit, 802.11 ac wireless router with a good range on a low budget, I would certainly recommend Tenda AC10.

PREVIOUS
Upgrading my Router: Asus RT-AC58U
NEXT
Am I Financially Ready To Retire?