The past few weeks have been quite busy with multiple electronics failures and other interesting things happening in my personal life. One of the failed electronics was my old TV. This was the first TV that I bought with my salary a few months after I landed my first job. So it has some emotional connection. To get you up to speed, I finished my MS in the US and also started working in the US. In 2006 when I bought the TV, flat screen TVs were just coming into the market. I wanted to test out the latest in tech but did not want to spend too much on it. So I bought a cheap Sceptre X32GV-Komodo flat screen TV. It worked great. So great in fact that I shipped it to India when I moved in 2011.

While we later purchased a 55” TV and then a 65” TV for the living room, this 32” TV was setup in my parent’s bedroom so my dad could watch some news and youtube. It worked fabulously until it failed recently after almost 16 years of service. What happened was that the backlight of the TV started to flicker but it still used to work. After using the TV like that for a few more weeks, it failed to even turn on. The standby light was on, pressing the power button seems to turn on the TV but no backlight or video. Naturally, being the guy that I am who cannot give up something without first at least troubleshooting and trying a repair first, I turned to youtube for advice.

After much research I got up to speed with the various components of TV like power board, T-con board, inverter board, main board and backlight. Remember that I repaired another TV twice by troubleshooting the problem and replacing the main board. I suspected the problem with this TV might be a backlight issue. The only problem is that most of the videos on youtube show how to repair LED backlight. Since this TV is from a really old time, the backlight would not be LED but CCFL. Anyway, before I get ahead of myself I decided to follow the advice on the internet to troubleshoot and pin point the problem instead of making random assumptions.

I removed the back cover of the TV and found out that my TV has only 3 boards (main, power and inverter). Perhaps the T-con is behind.

Warning: There is risk of electric shock. Don’t go about opening back panels of TV and touching parts even when you have disconnected the power. There are some huge capacitors that can store charge for a long time after disconnecting the mains. Only attempt troubleshooting if you know what you are doing and are skilled in this line of work. You have been warned! 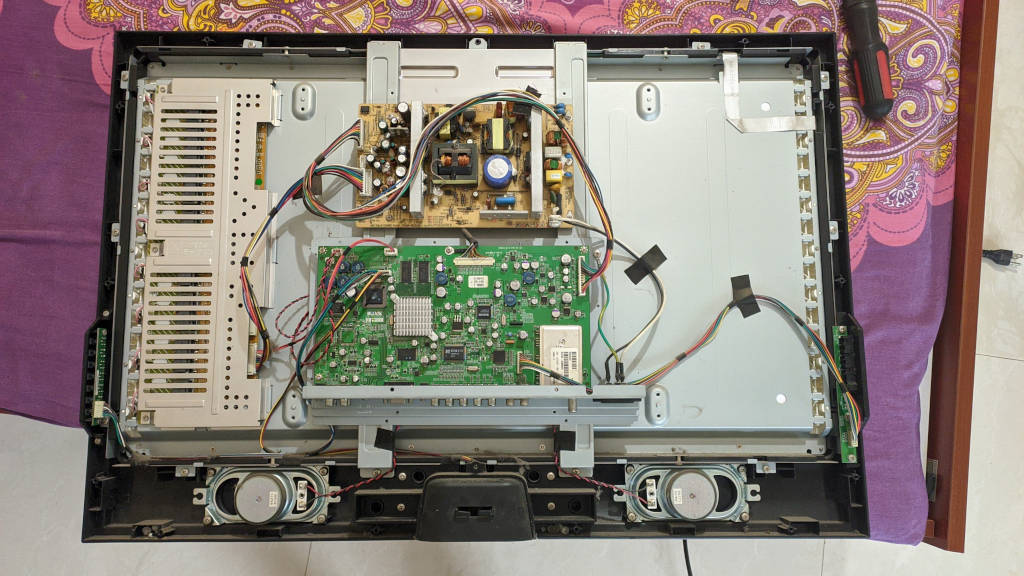 I started probing various pins to check voltages. Unfortunately the electronic boards in the TV are not marked with the expected voltages for some pins, so I was sort of guessing.

Voltage markings for some pins are missing on power board

I figured that the +24V pins are for the inverter board which lights up the backlight. The +5V pins are for the main board. When the TV was in standby mode, the +5V pins were showing correctly. The unmarked pins as well as 24V pins were all showing 0V. When I turned on the TV, the main board is supposed to turn on the 24V line for the inverter board. But it sometimes works and sometimes does not. So I checked the voltages on the unmarked pins and found that a couple of pins there were reading a dropping voltage. It works like this – when the TV is in standby the 2 pins are 0V and when I turn on they show +5V and slowly start to drain out to 0V. This is probably starving the main board and it is not triggering the inverter board.

So it seems like the problem might be in the power board which is not able to supply enough power to main board. That can only mean one thing. Bad capacitors :(. There may be other problems in the main board or in other boards too, but this is the first failure point. I visually inspected all the capacitors (caps for short) and found 3 bulged caps. Woohoo! Found the problem. All I need to do is replace the caps and be done with it! 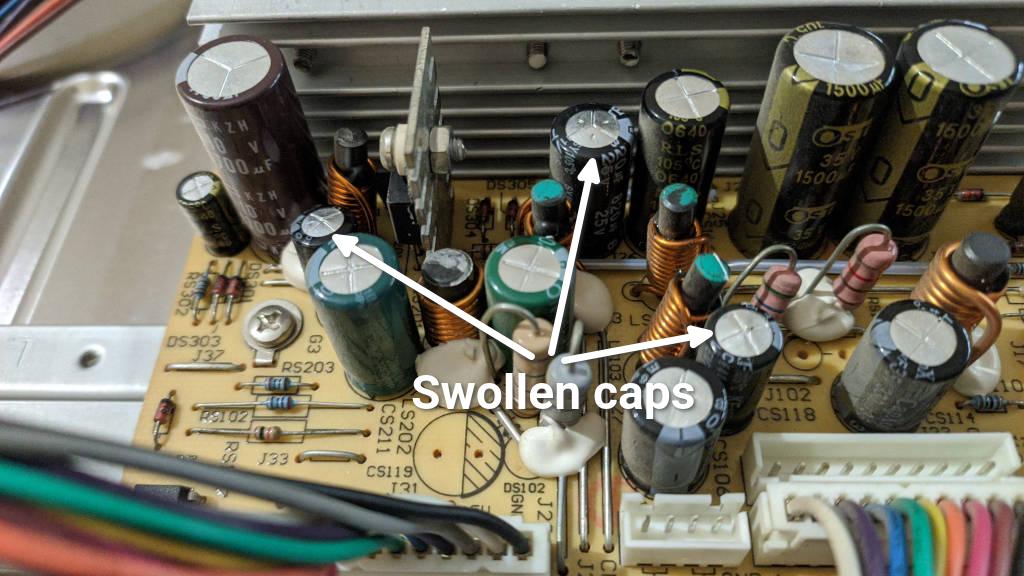 Bad caps that need to be replaced

I ordered the parts and got to work as soon as they arrived. I desoldered the 3 caps and replaced them with new ones. This took a lot of time even with a desolder pump and desoldering wick. 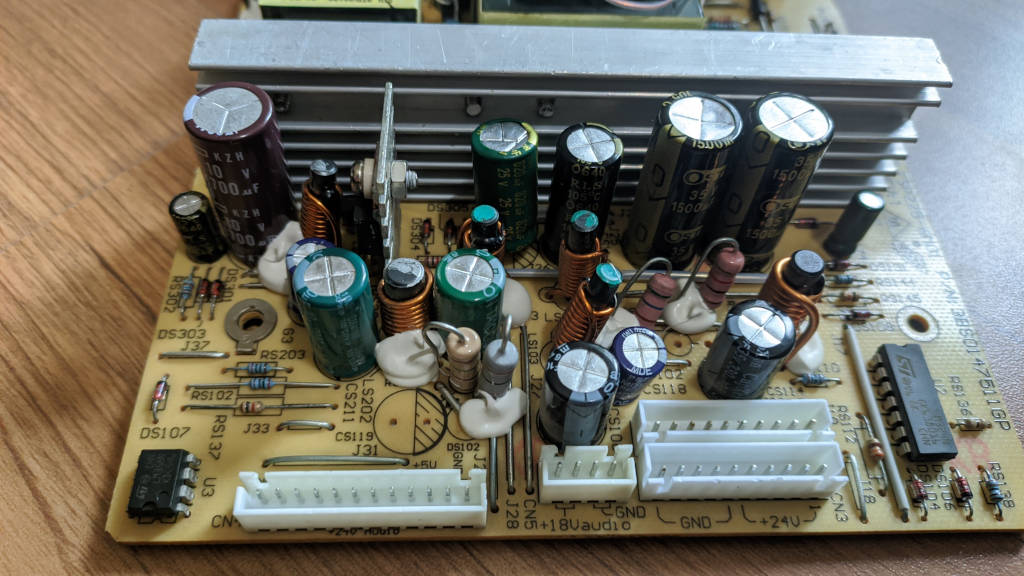 Board after replacing the 3 caps

I was super excited and put the board back into the TV and plugged in all the cables. Now for the momentous occasion. Standby light is on, pressing the power button started the main board and the inverter board! Then, the TV crashed. The backlight was on, but none of the functions on the TV remote worked. Seems like the main board is again starved. I checked the voltages and yes, the voltage was dropping again on those 2 pins. I did not fix the problem. In fact, I don’t even know what problem I fixed really. That was a bummer.

Perhaps it is time for a new TV. Then I searched on the internet with my specific model to see if anyone else had similar problems. I found a couple of threads on badcaps forum. In fact this thread was talking about the exact same problem I was facing. The person replaced 4 bulged caps of which 3 were exactly the same caps that I replaced. Yet his TV was also not working.

Reading further, it seems like he replaced a bunch more caps and then the TV started working. I decided to do the same. I ordered every single replacement cap for the board which is 15 caps in total. I am still waiting for the caps to arrive. Then I have a lot of work ahead – desoldering old caps and soldering new ones. Will update if that fixes the problem. But as of now, no dice.