I have already written a few posts on 4% rule, but some readers were not sure if it really works in Indian context. We don’t have the equivalent of the Trinity study (which resulted in the 4% rule) done here in India. Or at least I am not aware of one. For those of you who don’t know the Trinity study, I will brief you on it. Basically the study found that if you withdraw 4% from your retirement account every year after accounting for inflation your retirement fund should last 30 years or more. But the study was done in the US using bond, inflation and equity market data from 1925 to 1995. It is really not a rule as much as a thumb rule. While I don’t have the luxury of such nice data for India, in this post, I will attempt to use some crude data loosely based on the same notion.

First lets see whether 4% rule holds any water with some basic assumptions about the current state of affairs in India. The 4% rule is saying that if your expenses are less than or equal to 4% of your retirement corpus, your money should last a long time. It is easier to go with some numbers instead of some vague X and Y%. Assume my annual expenses are Rs. 6 lakhs which is 4% of my retirement corpus. Then my retirement fund should be Rs. 150 lakhs (4% of Rs. 150 lakhs = Rs. 6 lakhs).

Let us assume that the long term inflation going forward is on the high side of RBI mandated inflation rate which is 6%. Further let’s assume our investment returns will be around 9% given what we know about past stock market and fixed deposit returns. Now if we project how our corpus will grow over the years as we withdraw 4% compensated for inflation every year, it will look like the following graph – 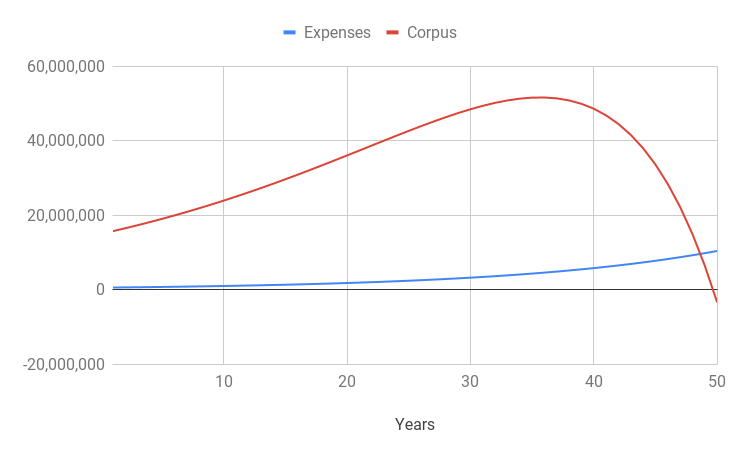 What the graph is suggesting is that the retirement fund will last for about 50 years if our assumptions about inflation and returns are correct. Of course real life is never like that. No one ever has seen such a smooth graph of their investments even if they have invested 100% in fixed income assets. But it gives us a guideline that 4% rule indeed works even in India with no other income other than your corpus, given the current inflation and investment return expectations. But I think we can do better.

Projection Based On Past Equity Returns

The previous attempt at making a projection was just a start. It does not use any real data nor does it indicate what asset allocation we should go with. The idea is that you better have an asset allocation that gives at least 9% return on average. Now lets try with some real stock market data and some asset allocation.

The only problem is that I don’t have data for 50 years which is ideally what I wanted. So lets go with the last 25 years of Nifty 50 data and then extrapolate it to another 25 years using past data. Of course we all understand that past returns are not indicative of future returns, but lets just go with that anyway shall we? Let’s go with a conservative 70% in fixed income (like a 1 year FD or ultra short term debt funds) and only 30% in equity (invested in an equivalent of Nifty 50 mutual fund). Further, lets assume the fixed income returns will be 6%, the same as inflation. Ideally you would get slightly better than that. Finally, assume that you rebalance the asset allocation at the start of every year. Then the projection looks as follows – 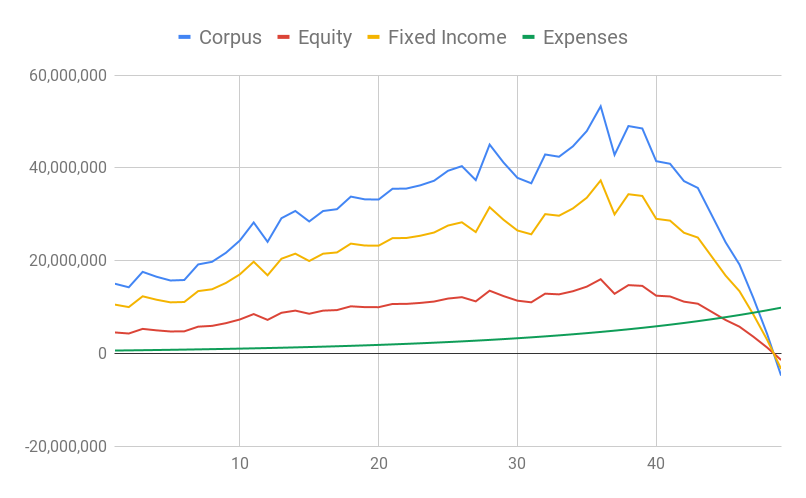 By strange coincidence, just like the basic projection in the previous section suggested, we will run out of money after about 50 years in retirement. Of course we can do better than that. If we are little bit more adventurous and invest 50% in equity and 50% in fixed income asset classes, then we get a much nicer graph which seem to indicate that we will not run out of money even after 100 years. 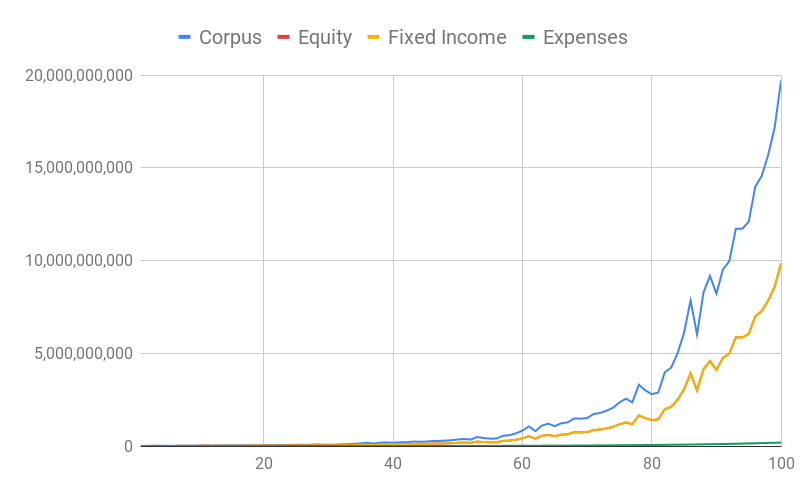 Projection Based On More Past Data

What happens if we throw more data into the mix? I used inflation data and 1 year FD rates of the past 25 years in India and built another projection. For the future years I assumed a fixed inflation of 6% and FD rate of 6% along with extrapolated values for Nifty 50. All other assumptions, along with a conservative 30% asset allocation to equity remain the same. Now the projection looks like this – 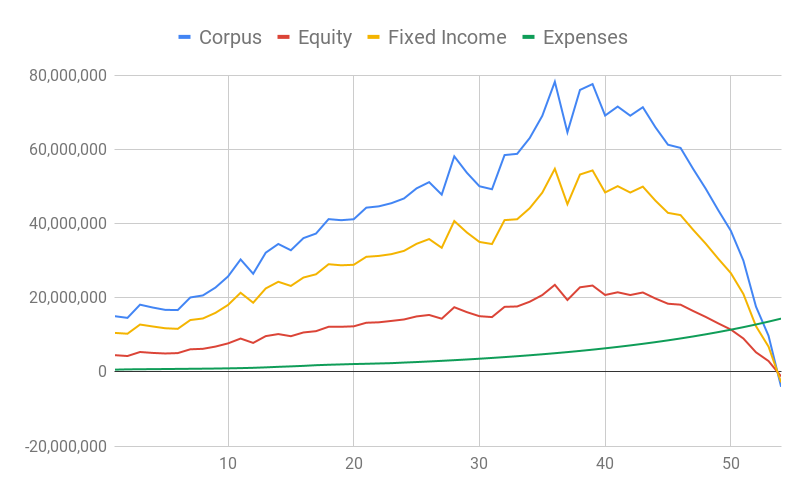 Again, you can have a good 53 years of retired life before you run out of money. So no matter how you slice and dice, it seems like you can have about 50 years worth of time once you retire going by the 4% rule in India. If you don’t insist on being too conservative with the asset allocation then your money can last as much as 100 years or more. And we made all the calculations without including any buffer. If we include a 20% buffer, the results would be even better as shown in the graph below and your corpus should last 90 years. 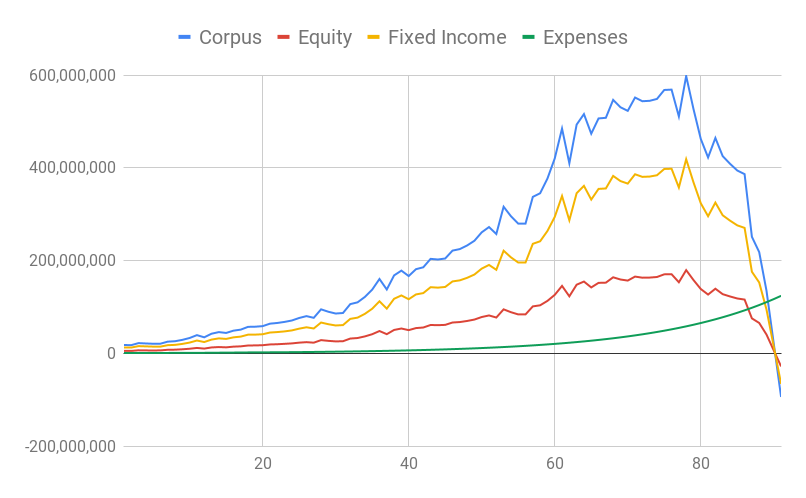 Of course as we all know, past performance is not indicative of future returns. So while we can make some projections based on the past, there is no guarantee that the future will be the same.

We did not consider taxes as part of the projections because for one, you don’t actually pay that much in taxes after retirement. Remember that unlike your salary which is taxed on the whole amount that was deposited in your bank, the money you take out from retirement fund is only taxed on the capital gains. And generally there isn’t a lot of capital gains at least in the initial years of retirement. I know it is a bit difficult to wrap your head around that information, but trust me on that. Moreover, even if you have capital gains the tax rate is much lower both for equity and debt mutual funds (thanks to inflation adjustments). On top of that you don’t have to pay any taxes for about Rs. 5 lakhs of capital gains according to current tax law.

I made the projections using inflation data from macrotrends and 1 year FD rates from RBI. I obtained Nity 50 data from NSE. Finally, if you’d like to play with the data yourself, please make a copy of my spreadsheet and change the numbers to your liking. All I can finally say is that if you follow the 4% rule, the most conservative estimate says that your money will last 50 years after you retire. So in my case, since I retired at 37, my investments based on 4% rule should last until I turn 87 at least. That sounds good enough, but of course I have a buffer and a more aggressive asset allocation so it should last much longer.

How Is 4% Rule Working Out For Me?

PREVIOUS
Correction, Bear or Recession?
NEXT
How Is 4% Rule Working Out For Me?