Recently, the trusted battery in my scooter finally died. We own a Hero Honda Pleasure and its battery has never been replaced since we purchased it in 2011. That is a full 8 years of service, which is quite amazing for a scooter battery. Anyway, we decided to replace it. Now, I have replaced car batteries a couple of times so far, but this would be the first time replacing a scooter battery. However, the instructions in the scooter manual for replacing the battery were surprisingly simple. So I thought there should be a post about it, because ... why not?

After consulting the scooter manual, ordered a 4AH battery from amazon. The battery did not arrive on time. It did not arrive even after a week of estimated delivery. A couple of calls to amazon and I got my refund. Amazon customer service is and always has been pretty awesome. Strangely, the battery arrived a few days after my refund. So I have my refund and the battery :). On to replacing the battery now. The manual suggests that the front cover of the scooter needs to be removed to change the battery. To remove the front cover, remove 6 screws from the back and 2 screws from the front.

The front cover should come off quite easily, but don't pull it out completely. There are a couple of cables connecting the front cover to the chassis. Unplug the cable headers first, then remove the cover.

Battery is visible in plain sight :). Unscrew the terminals, starting with the negative terminal and then the positive terminal. Next remove the housing screw to free the battery from its compartment.

Unscrew the terminals and housing 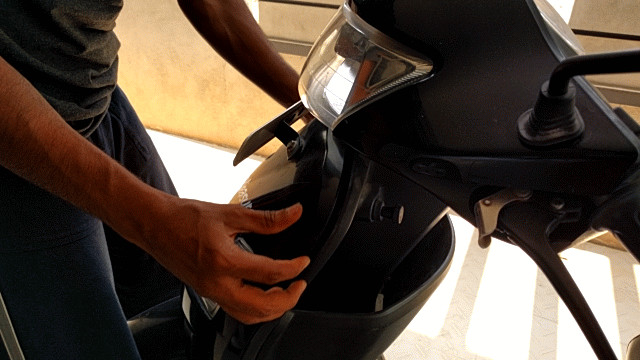 That's it. All done! Now the self start works like a charm.